Feel free to “check out” as many books, videos or articles as you’d like.  For now, these are listed alphabetically by topic.

The Thirteen Tribes of Long Island:  The History of a Myth by John Strong (36 pages): strong-j.-1992-the-thirteen-tribes-of-long-island-the-history-of-a-myth-1.pdf

The 12 Tribes of Wisconsin–a video presentation by Brothertown Peacemaker, Dr

A Brief Sketch of the Brothertown Indians:  A letter written by Thomas Commuck in 1852 for the Wisconsin State Historical Society: thomas-commuck-writing

GENESIS OF THE BROTHERTOWN INDIANS:  An article written by Caroline Andler which discusses the original putting together of Brothertown:  Genesis of the Brothertown Indian

Thirty Years in the Itinerancy:  By Reverend Miller.  Chapters II and III discuss his visit to our Tribe in 1845.  He was very impressed with Brothertown singing. thirtyyearsiniti00mill

Indian Melodies: A hymn book by Thomas Commuck with a preface and some commentary by him: https://musopen.org/sheetmusic/34336/thomas-commuck/indian-melodies/

BROTHERTOWN SINGING:  A lengthy article by Caroline Andler covering Brothertown hymns, Indian melodies and singing plus a diary exerpt based on the Brothertown in WI in 1836: Brothertown singing

Article on Thomas Commuck and his “Indian Melodies” by James Page.

A superb article by Brotherton, Kathleen Brown-Perez on the history of Brothertown recognition: federal-policies-and-the-elusive-quest-for-federal-acknowledgment.pdf

Why Brothertown should have received federal recognition and yet doesn’t need it to tell us who we are (beginning on p56):  http://wesscholar.wesleyan.edu/cgi/viewcontent.cgi?article=1704&context=etd_hon_theses

The BIA’s response to BIN’s petition: https://www.bia.gov/sites/bia.gov/files/assets/as-ia/ofa/petition/067_brothe_WI/067_pf.pdf   Includes a lot of wonderful details on our people and history.

The 1817 Thomas Dean journal documenting his trip with several of the Brotherton Indians to see about procuring land in Indiana: https://archive.org/details/journalofthomasd01dean/mode/2up

The Brothertown Who Migrated to Indian Territory: an article by Caroline Andler

The Brothertown Indians in Minnesota: an article by Caroline Andler the-brothertown-indians-who-moved-to-whitesville-reynolds-township-todd-co.-mn.pdf

Annals and Recollections of Oneida County New York, published in 1851, is an under-utilized resource when it comes to Brothertown history. There are several Brothertown references throughout the book though the bulk of information can be found in the chapter on Marshall and in the last 3 pages of the last chapter entitled “Indians”: 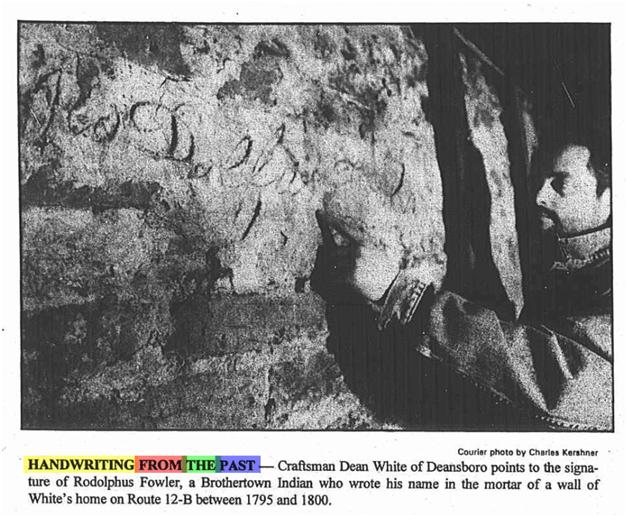 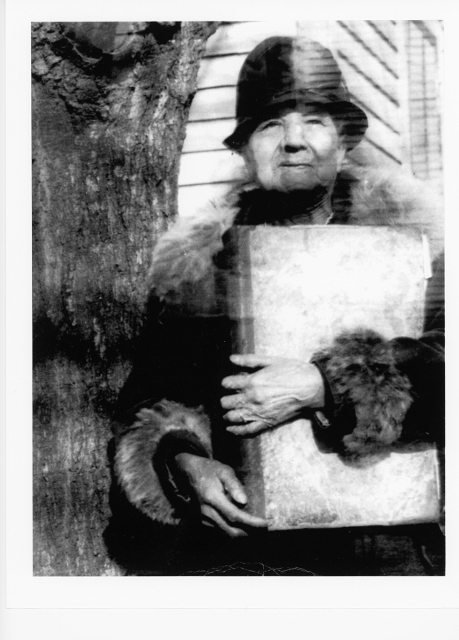 Above:  Mrs. Leura D. Fowler Kindness clutching her Brothertown record book.  This is believed to be the same book subsequently owned by Corliss Welch covering the years 1788-1901.  A copy of this book is found in the link below.  Photo received from Caroline Andler June 2019.

“Records of the Brothertown Indians” Book covering the years 1788-1901”: Photostat Copy of Record book 1788-1901 (this is not a photocopy but a photostat which lets you know the content but does not show the beautiful handwriting 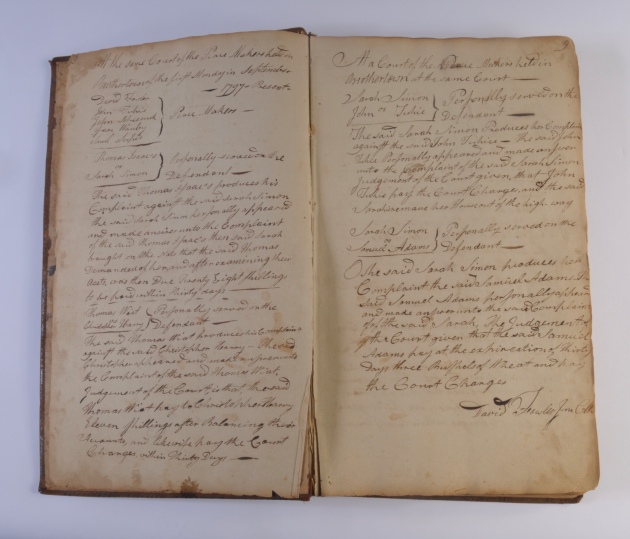 An article by Caroline Andler on the Peacemakers record book (1797-1843): Brothertown Court Book

A history of the communities in Calumet County, including Brothertown, put out by Calumet County Historical Society: https://calumetcountyhistoricalsociety.org/ProtectedArea/Short%20Little%20History%20of%20Chilton%20by%20Debbie%20Barany.pdf 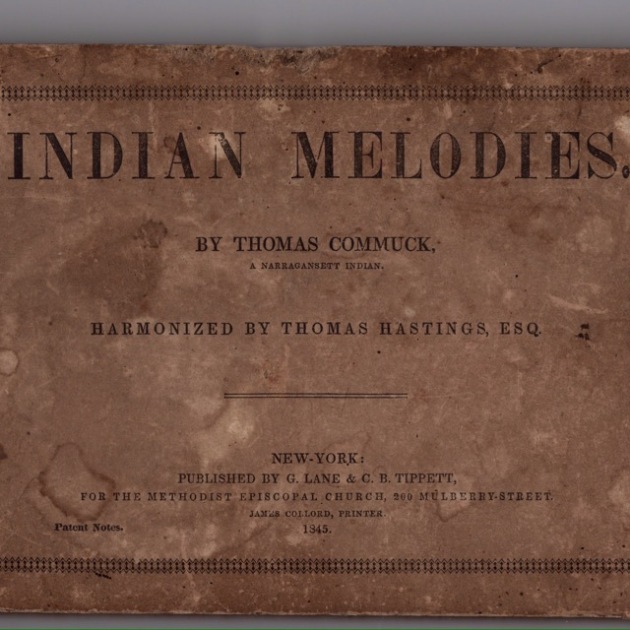 1840 letter to Rhode Island to petition to sell his land: 1841_jan._thomas_commick_to_sell_real_estate-2.pdf

NATIVE AMERICAN BOOKS COLLECTION:  Amherst College is building and digitizing an amazing collection of rare books written by Native Americans.  A must see for anyone interested in Native America.  Some items that may be of particular interest to Brothertown researchers include 2 versions of Occom’s sermon preached at the execution of Moses Paul and a book on the Algonquin languages.

Williams, Roger.  A tome which includes his famous A Key Into the Language of the Americas:  https://archive.org/details/completewritings028406mbp

Rhode Island’s records on the Narragansett

Travels in New England and New York:A literary survey by Timothy Dwight focusing not just on the physical features and towns in New England but also on the inhabitants and their demeanor. Brothertown is included.  Caution: Contains some Native American prejudices:  travelsinneweng00dwiggoog

SAMSON OCCOM: A clipping from the Utica Morning Herald dated February 1894. Contains a lot of accurate (and some inaccurate) information on Samson Occom: Occom

Samson Occom and the Christian Indians of New England by William DeLoss Love and published in 1899: Includes an index with all of the known Brothertown Indians. samsonoccomchris00love   Additional formats of the same book can be found athttps://archive.org/details/samsonoccomchris00love

The Collected Writings of Samson Occom, Mohegan by Joanna Brooks is available to preview on Google:  https://books.google.com/books/about/The_Collected_Writings_of_Samson_Occom_M.html?id=R9ELRhEdupMC&printsec=frontcover&source=kp_read_button#v=onepage&q&f=false

Occom’s 1774 hymn book, A Choice Collection of Hymns and Spiritual Songs: Intended for the Edification of Sincere Christians, of All Denominations, (published as words only; no musical notation) contains many reprinted songs and a few of Occom’s own: http://quod.lib.umich.edu/e/evans/N10659.0001.001?rgn=main;view=fulltext).

Occom’s 1st publication was A Sermon Preached at the Execution of Moses Paul in 1772.  https://archive.org/details/sermonatexecutio01occo

Occom’s autobiography, A Short Narrative of My Life, is available to read at the Dartmouth site:  https://www.dartmouth.edu/~library/Library_Bulletin/Nov1999/Hoefnagel_Close.html  Occom originally wrote his autobiography in 1765.  He wrote this 2nd draft in 1768.

Dartmouth College hosts the Occom Circle site which contains both scans and transcripts of a significant number of Samson Occom letters and journals: https://www.dartmouth.edu/~occom/

Other original Occom documents are available through the Connecticut Historical Society at http://connecticuthistoryillustrated.org/islandora/search/occom?type=dismax

4 sermons recovered from Occom’s trip to England and not included in the Joanna Brooks book, The Collected Writings of Samson Occom, Mohegan:  https://brothertowncitizen.wordpress.com/2017/06/13/recently-discovered-samson-occom-sermons/

“A Brief Narrative of the Indian Charity School in Lebanon in Connecticut, New England”briefnarrativeof00whit_bw  This is an interesting collection of letters, endorsements, and accounts from the early to mid-1760’s which, seemingly, were to be used by Reverends Occom and Whitaker on their mission trip to England and Ireland.   Some highlights are a detailed account of Occom’s 1761 meeting with the Oneida and the wampum belt received, Wheelock’s very clear statement of intent as to what he planned to do with the money raised by the Rev.’s overseas, and an appendix added in this second  edition which provides updates from 1766-‘67. 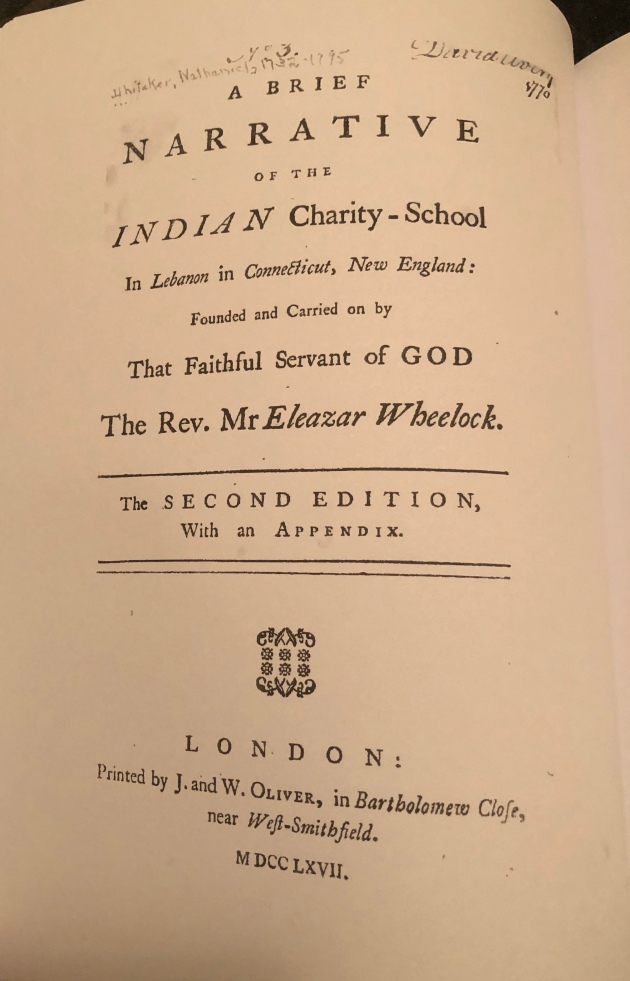 Joanna Brooks gave a Zoom video presentation to our citizens in 2017 which is available to watch on YouTube: https://www.youtube.com/watch?v=FxDDcpbiSYw&t=2s.  Alternatively, if you go to YouTube and type in Brothertown Forward you can find this and several other Brothertown presentations.

Brad Dubos, Rutgers graduate student, who is, in part, researching Samson Occom and the importance of place for the Brothertown Indians talks with Brothertown Forward: https://m.youtube.com/watch?v=SOeEt28rby0

CNAIR Symposium at Rutgers 2019 (Brad Dubos is the 2nd speaker in this episode – episode 2): https://m.youtube.com/watch?v=4B7Ka5V5zxE&list=PLJl9Zsw3ptuJ9eCjyLr9XcUPufzyhxk9_&time_continue=727

*See also the section on Wheelock below

A Man Called Sampson by Will and Rudi Ottery.  This book, written in the 1980s, is based on the ancestry and progeny of a Pequot named Sampson and includes information on many things including the Pequot War and the Brothertown Tribe. a-man-called-sampson-by-will-and-rudi-ottery

A link to the Joseph Fish journals in which he kept records of all his time on the Pequot Reservation(1700’s):  http://findit.library.yale.edu/yipp/?utf8=✓&utf8=✓&search_field=title&q=fish%27s

Ripley, Dorothy: Journal of a female preacher who visited the NY Indians in 1805: https://archive.org/details/bankfaithandwor00riplgoog/page/n13

Panoplist newsletter.  The October 1818 issue includes a letter regarding the Stockbridge Indians worshipping (and singing hymns!) on their way to White River Indiana.  Bottom of p 489 at this link:  https://archive.org/details/panoplistandmis00armsgoog/page/n488

David McClure Journal:  McClure had attended Moors and knew the Brothertown founders personally as well as our parent tribes:   diaryofdavidmccl00mclu

Memoirs of the Reverend Eleazar Wheelock:  An early book on the life of Eleazar Wheelock whose story cannot be told without mention of Samson Occom, the Mohegan minister who made him famous and funded his Dartmouth College:
Memoirs_of_the_Rev_Eleazar_Wheelock_D_D

The Indian History of an American Institution by Colin Calloway:

Dartmouth College began life as an Indian school, a pretense that has since been abandoned. Still, the institution has a unique, if complicated, relationship with Native Americans and their history. Beginning with Samson Occom’s role as the first “development officer” of the college, Colin G. Calloway tells the entire, complex story of Dartmouth’s historical and ongoing relationship with Native Americans. Calloway recounts the struggles and achievements of Indian attendees and the history of Dartmouth alumni’s involvements with American Indian affairs. He also covers more recent developments, such as the mascot controversies, the emergence of an active Native American student organization, and the partial fulfillment of a promise deferred. This is a fascinating picture of an elite American institution and its troubled relationship— at times compassionate, at times conflicted—with Indians and Native American culture. (Taken from http://www.upne.com/1584658443.html.  Note:  This link also contains a podcast of an interview with the author.)

The Big DayJanuary 17, 2022
The big day is here.
Follow The Life of the Brothertown Indians on WordPress.com